It was the first day of our trip to Italy. I knew we were going to need a good breakfast to keep us going through the day on our tour of the Vatican.

We were staying in an apartment in a 19th century building conveniently located near the Vatican Museums. It was also just across the street from the Trionfale Market, a vast indoor market selling every kind of food imaginable, including meats, fish, pasta, cheese and fruits and vegetables.

This was where Romans went to do their daily shopping. The stalls were all color coded to help shoppers navigate the labyrinthine maze of 273 stalls, with red for meat, green for fruits and vegetables and blue for fish.

We walked down the three flights of stairs of the apartment building rather than taking the coffin-like elevator. The doors to the market entrance were just outside on the Via Tunisi.

The smell of crispy pork filled the air as we approached the entrance.

The first stall we came to was a butcher shop called Da Alina. We were greeted warmly by an Italian man in his 50’s, wielding a large knife in one hand while waving us over with the other. He was slicing up the largest piece of pork I’d ever seen.

He explained to us that is was called “porchetta,” a Roman specialty of pork stuffed with herbs and roasted in its own skin until crispy. He sliced off a piece of the pork roulade like he was chiseling away at a sculpture, gently placing the meat in my hand. My stomach began to growl uncontrollably.

The juices ran down the side of my mouth as I bit through the outer layer of skin, so crispy it practically disintegrated in my mouth. The meat was rolled up with a layer of aromatic herbs tasting of garlic, rosemary, thyme and fennel. I expected it to be greasy, but it wasn’t at all.

The man explained that the layer of pig skin coating the meat on the outside allowed all of the juices to remain in the pork as it slowly roasted on the spit, leaving the interior tender and the exterior crispy. It was the best pork I’d ever had in my life. I bought two slices, which he cut extra thick and gave me with a smile. I thanked him for the sample and he wished us well on our journey.

Just when I didn’t think it could get any better than the porchetta, we moved on to the next stall which was filled with cheeses of all varieties. A giant wheel of Pecorino Romano immediately caught my eye. Rome’s most famous cheese, made from aged sheep’s milk, Pecorino is used in pasta dishes across Rome.

There were also tanks of water in the front case, slightly murky from the water buffalo mozzarella floating in them. The owner explained that the cheese was imported daily from the Campania region along with fresh ricotta, shaped like the baskets in which they are drained. I picked out a small wheel of provolone cheese and a bag of fresh mozzarella buffala, though I could’ve easily eaten some of everything.

We then moved on to the vegetable stalls, stacked from top to bottom with colorful produce. There were stacks of purple tipped asparagus, baby artichokes, bright green fava beans and juicy strawberries carefully arranged in little boxes. Clusters of tomatoes hung from hooks along the top of the stall, bright red like red rubies hanging from a necklace.

I bought a string of tomatoes and immediately noticed how heavy they were for their diminutive size. I knew they were going to be the juiciest tomatoes I’d ever had. I picked up a basket of berries, which I didn’t immediately recognize, dark purple in color, vaguely resembling a blackberry.

The owner of the stall told me they grew on trees during the springtime and were called “gelsi” in Italian (“mulberries” in English). I popped one in my mouth and was amazed at the depth of flavor, slightly sweet and musky. It tasted like a glass of red wine that had become a berry. I couldn’t wait to eat the berries with this amazing spread of food.

We quickly walked down to the Risorgimento Square where we were meeting up with our group for the tour of the Vatican.

There was a small cafe in the center of the square with shaded tables just outside. The waiter assured us it wasn’t any problem for us to sit and enjoy our food with some coffee from the cafe.

He quickly brought out two cappuccinos. I could immediately smell the intense aroma of the espresso before I even tasted it. It had a bittersweet flavor that was dark, rich and robust, with a generous layer of sweet foam on top that left behind a tiny milk mustache on my upper lip. I smiled from ear to ear, feeling overjoyed to finally be in Rome.

I looked at the food spread out before us in amazement, the bright red tomatoes, the creamy balls of cheese, the fat slices of porchetta and the juicy berries.

The other tourists looked at the marvelous spread on our table with a mixture of wonder and curiosity. One couple asked us, “Where did you get all of that food? It looks amazing!” I explained that we picked it up from the Trionfale market down the road. We were so ravenous we quickly dug into the spread. It was one of the most amazing breakfast meals I’d ever had, paired especially well with the bittersweet espresso.

As we ate our breakfast and sipped our coffee I marveled at the stone walls of the Vatican in front of us. It felt like we were a world away from our home in Portland, Oregon. It was the perfect way to start the day before our tour of the Vatican. 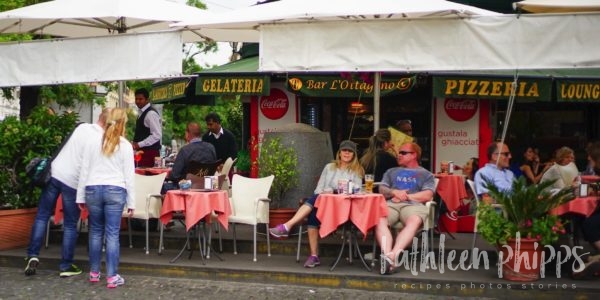 If you find yourself in Rome for a tour of the Vatican, definitely stop by the Trionfale Market and the Cafe in Risorgimento Square for an unforgettable picnic meal.

Address: Via Andrea Doria between Via Tunisi and Via Santamaura.
Hours: Open Monday, Wednesday, Thursday and Saturday from 7 a.m. to 2 p.m. Open Tuesdays and Fridays from 7 a.m. to 7 p.m.
Da Alina (Stall No. 247): Sells porchetta and other meats

Walking directions from Trionfale Market to Risorgimento Square (Piazza del Risorgimento): From the Market head south on Via Tunisi a few blocks until you reach the staircase leading up to the Viale Vaticano, the road running along the walls of the Vatican.

The Risorgimento Square will be just on the left. The Cafe is located in the center of the square.

There’s no further information about the cafe’s address or hours of operation. Enjoy your cappuccinos!