The Diamond Jubilee Tea Salon at Fortnum and Mason serves afternoon tea fit for a queen. One of the most luxurious department stores in London, the venerable store has been serving tea in their upstairs salon since 1926. The salon underwent a renovation in 2012 when it was reopened as the Diamond Jubilee Tea Salon, dedicated to HRH Queen Elizabeth II. Founded in 1707, Fortnum and Mason is one of London’s oldest department stores and is well known for their variety of luxury goods.

The spacious tearoom covers two sections of the fourth floor and is beautifully decorated with light beige paneling on the walls and plush chairs covered in a turquoise blue fabric. 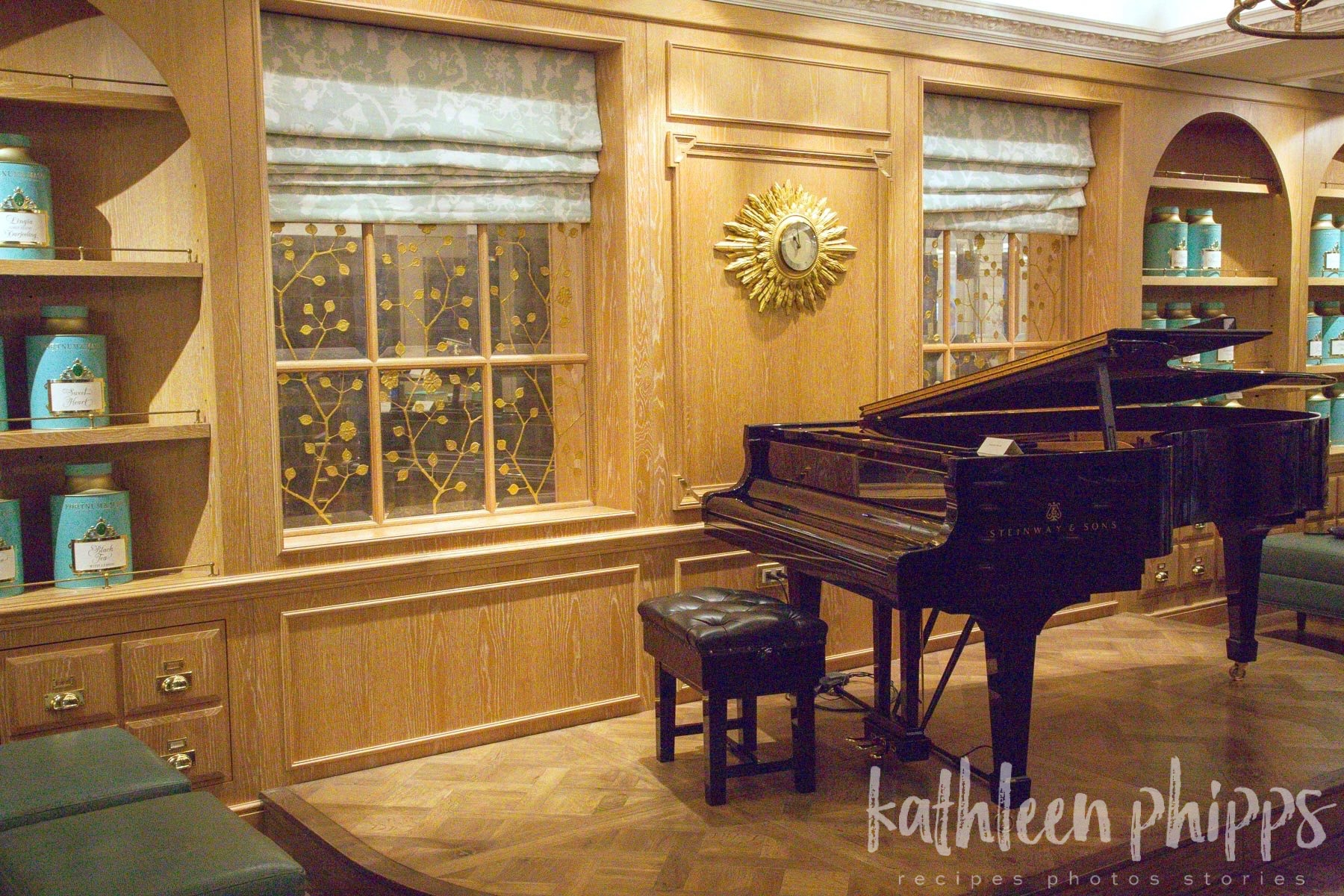 A grand piano stands in the foyer of the tea salon, played during the tea service.

The salon’s tables are immaculately set with fine white linen tablecloths and cups and saucers in the department store’s famous “St. James” pattern. The white and “eau de nil” jade blue pattern features golden embellishments depicting scenes of the nearby St. James park during the 18th century. This design, called “chinoiserie,” was popular in England during the Georgian-era.

The salon serves two afternoon teas, a traditional “Afternoon Tea,” which includes tea sandwiches, scones with clotted cream and jam and desserts and a “High Tea” which is served with a savory main dish, tea sandwiches, savory scones and spreads and a dazzling array of savory accompaniments in place of the desserts. I opted to try one of each of the teas. 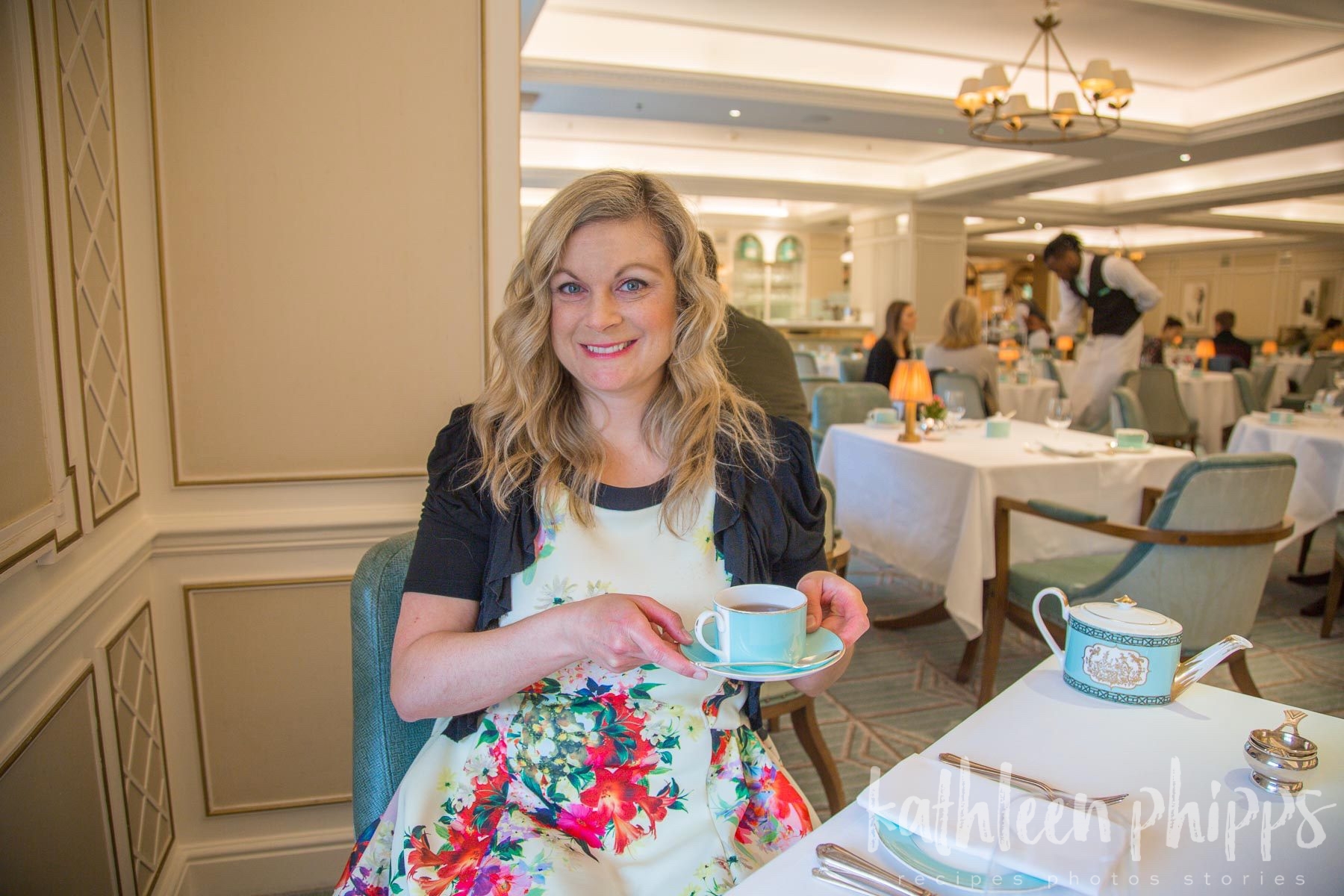 For the High Tea I was given a choice of several seasonal dishes, out of which I ended up choosing a beautiful plate of Cornish halibut served with Jerusalem artichoke puree and samphire, drizzled with nasturtium infused-oil and topped with caviar. The samphire had a wonderful briny flavor that complemented the fresh-caught fish and the dollop of caviar on top really took the dish up a notch, transforming it into something very classy and elegant.

The savory course came with a tiered tray of exquisite savories, including an eclair filled with smoked salmon cream; crab salad and cucumber served on multigrain bread; a creamy egg custard called “Eggs Drumkilbo” served in a hollowed out eggshell topped with lobster (a favorite of the Queen’s); beetroot and ginger cheesecake and a sweet pea and coconut panna cotta on a savory oatcake, which had a wonderful sweet pea flavor and a light aftertaste of coconut.

The High Tea was served with two different savory scones and accompanying savory spreads, including  a spring onion and chive scone, served with grape mustard jelly and a goat’s cheese and smoked salmon scone served with whipped dill-infused butter.

A selection of five miniature desserts was served with the traditional afternoon tea, including a lemon tartlet, chocolate torte, white chocolate truffle, red velvet cake with cream cheese buttercream and a choux puff filled with rose flavored pastry cream, topped with an edible rose petal. The desserts were beautiful, arranged on the plate to look like a bouquet of spring flowers.

For my tea selection I chose three different teas from the salon’s extensive tea list including earl grey, peach black tea and a strawberry-infused green tea.
The scones were served last, freshly baked right out of the oven, one plain scone and one with sultanas, which I topped with clotted cream and Fortnum’s house made strawberry jam.

I topped the plain scone with a big dollop of Fortnum’s lemon curd, which was a heavenly combination along with the buttery scone and velvety rich clotted cream.

The whole experience was made even sweeter by my server, who was very kind and knowledgeable about the tea menu and made sure that all of my needs were taken care of.

My afternoon tea at Fortnum and Mason’s Diamond Jubilee Tea Salon was an unforgettable experience richly steeped in British history and tradition, one that would make anyone feel like royalty. I would definitely recommend this afternoon tea to anyone who is visiting London and is seeking to explore the tradition of afternoon tea further.
Click to enlarge photos: